14:47 - Kankuro’s 600 has integer overflow. We know nothing about other solutions that might fail. 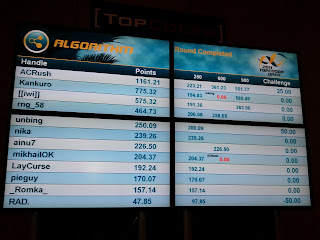 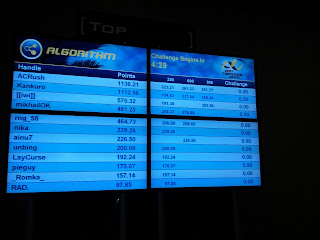 14:40 - he also tried to challenge Kankuro’s 900, also unsuccessfully. That’s it for the challenge phase!

14:38 - unbing brought down Kankuro’s 600. That moves him into 5th place on preliminary standings!

14:38 - rng_58 and ainu7 stopped reading others’ solutions, other ten contestants are still trying to find some bugs.

14:37 - Let me remind that this blog is actually a team effort :) Petr, KOTEHOK, bmerry and Vitaliy trying to bring you the latest information.

14:35 - most of the challenge phase is over, just 4 minutes remaining. It’s just 10 minutes at the onsite rounds. I still expect a few last-second challenges, though.

14:32 - Four contestants are reading solutions of ACRush. What are they trying to find there?

14:28 - ACRush is doing something with a large random case of many numbers. Kankuro has tested his 600 and got a negative number, his solution seems to be wrong. Some contestants are watching history and write test generators.

14:25 - Coding phase has ended. Some people think that 600 must be the most challengeable problem though there are seven sample tests. We’ll see in the few minutes.

14:23 - Kankuro has submitted 900 and now he is second in the scoreboard with all three problems complete. Some other contestants are still testing their solutions, but they seem not to pass the samples.

14:13 - nika was one of the first to open 900, but now he has some five-dimensional dynamic programming uniformly filling his screen, seems that it is very hard to debug

14:11 - ACRush finally compiled his solution for 900, but it did not pass the first sample

14:04 - mikhailOK has passed large sample cases 5 and 6 in 600. He also has a function “getStupid” in his code which may be used in something like stress-tester.

14:02 - mikhailOK is testing 600 and it seems to pass at least some non-trivial cases, may be we can expect submit from him after some time; most of others are still coding something.

13:57 - most of contestants working on 900 have just non-moving flashing cursor in their code, they might be thinking of something; though [[iwi]] is writing something like a testing-code.

13:57 - at this point, I think it should be pretty obvious to the contestants that many 600s and 900s may fail, so accuracy will be the deciding factor. I guess there are two main strategies - make sure you get one absolutely correct and forget about the second, or submit two hoping that at least one is correct :) Not many have the second strategy available, though.

13:51 - RAD. and ainu7 are the only contestants still to submit anything.

13:50 - it seems like at least three contestants are testing their 600, but it does not work even on small cases.

13:48 - the feeling is that the 600/900 in this round are completely about implementing an intuitively easy solution that is really hard to implement.

13:42 - Vitaly has suggested a nice implementation of 900 solution: you can compress coordinates, enumerating them from 1 to 300, make 300x300 matrix, then go from top to bottom, monitoring the current segment on the corresponding y-coordinate, expanding it when there is a point outside its current border of the segment, and shrinking the segment, if there is no point in the whole rectangle lying to the left from the left border of the segment (or to the right from the right border) and completely downside to the current y.

13:36 - but this seems to be fixable if handled carefully. Let’s build the “left border” and “right border”. If they don’t intersect, we’re done. Whenever they intersect, we may choose either path. Let’s try to formalize this :)

13:28 - the last problem doesn’t seem very difficult as well. Let’s consider the topmost point, the leftmost point, the bottommost point and the rightmost point. Then we just need to connect those in the following way: consider going from topmost point to leftmost point. It looks like this:
#
#
###
###
#####
#####
and so on. So we just need to find all points (x,y) such that there’re no other point (x’,y’) such that (x’>=x) and (y’>=y).

13:23 - [[iwi]] went straight from the 250 to the 900. It looks like a variant of convex hull, where the points are discretised. A set is convex if one of the shortest paths between A and B (for any A, B in the set) through the lattice grid is contained within the set. The return value is the area. The constraints on the given coordinates are quite large (~10^9). There are up to 300 input points.

13:18 - and chains of odd lengths are basically counted by “layers”. Cells with x>=maxx-dx and y>=maxy-dy have chain of length 1, then chains with (x>=maxx-3*dx, y>=maxy-3*dy, and at least one of x
13:15 - the 600 seems easier than 250. All cells can be split into chains (by connecting (x, y) with (x+dx, y+dy) and (x-dx, y-dy)). For every chain that doesn’t have any coin, the answer is the size of the chain divided by 2 - either 0 or 1 cells in each chain will be unused. For chains that have coins, they are effectively split into smaller chains. So the only thing we need to find out is how many chains of odd length are there.

13:09 - nearly half of the contestants started coding, nika submitted his solution and gained 239.26 points

13:10 - column player can win in that situation because at her move, there are more columns than rows, so it’s always possible to choose one that doesn’t spoil the invariant.

13:09 - and question marks don’t add much - since the condition is independent for every row, it’s a pretty simple one to check even in the presence of question marks.

13:05 - nika is starting to write solution, the others are still reading the statement

13:02 - Everybody is starting with the easy problem.

13:01 - the easy problem is: given a NxN matrix with each cell colored with one of 3 colors, two players play the following game: 1st player crosses out a row, then 2nd player crosses out a column, and so on N-1 times until just one cell is left. If that cell is one color, the first player wins, the second color - the second player wins, the third color - a draw. Some of cells are ‘?’, meaning they are of each color with equal probability. What is the probability that each player wins?

12:58 - Contestants are finally at their positions. Best of luck to them!

12:54 - Competitors are standing in the line preparing to be called to the stage. Intro is beginning.

12:49 - During setting up, people write often some well-known algorithms. One of most popular algorithms during this time is min-cost flow. Some people just write templates or solve practice

12:38 - People are setting up their workstation and writing solution templates.
Posted by Petr Mitrichev at 8:44 PM