A Fenwick tree is a wonderful data structure that supports two operations on an array: increment a given value by a given amount, and find the sum of a segment of values, both in O(log n) time. What's more, the Fenwick tree is represented as just an array of the same size as the array being updated and queried, and we don't need to store the original array itself! In other words, we can support the above operations without any additional memory. Yesterday I've discovered that it's capable of even more!

For a start, here is the entire code for a Fenwick tree:

Here, query(at) returns the sum of all elements from the first element to at-th element. Finding a sum of arbitrary segment can be done via query(right)-query(left-1). You can find more details using your favorite search engine.

The standard Fenwick tree only supports updating one element at a time. However, it is quite natural to expect it to handle range updates, too - the update command now becomes "increment each value between left-th and right-th by the given amount". It turns out that we can modify the tree to handle such updates in O(log n) time, too! Here's how (warning, code untested - but I hope it works):

In other words, we implement a Fenwick tree with range updates via a normal (point-update) Fenwick tree that stores linear functions instead of just values. Is this a well-known trick?

The best team in the world right now, SPb IFMO 1, has only managed to get the second place at the Ural Championship, that was according to my plan :) However, my team has only got 13th place - and the winner was Moscow SU Unpretired, another veteran team that has 5 ACM ICPC medals between them - 2 gold, 1 silver, and 2 bronze - all in different teams. Congratulations Ilya (ilyakor), Jacob (Dlougach) and Ivan (Jedi_Knight)!

Here are the results of the top teams (full results here: http://acm.urfu.ru/chu/2013/standings.html):

At 2:13 into the contest, we solved the 6th problem and were in the first place. As you can see from the last line of the above standings, we didn't solve anything in the remaining 2 hours and 47 minutes. What happened?

For problem C (statements of all problems), we couldn't come up with the simple solution, and wrote down an long expression that we needed to integrate. Since it was a polynomial, that was an easy task, but the answer didn't match the sample output. We've found a couple of bugs in the calculations, the expression was no longer a polynomial, and integrating it numerically still produced an answer that's far off the example output.

For problem F, again we couldn't come up with a O(n^2) solution - we had one that we expected to be O(n^2), but closer to the end of the contest we realized it required O(n^3) time AND memory, and couldn't come up with anything better. What made me feel bad about this problem is that a few teams have submitted 'incorrect' solutions (that sacrifice some search space to stay O(n^2)) that still passed the system tests. It might be that it's impossible to fail those under the constraints (integer coordintes up to 1000), but still that feels bad.

For problem G, we knew the solution all along but postponed writing it since it was complex and since we had 3 other solutions ready but not working. After the end of the contest, I sat down to write it and it took 40 minutes and got accepted from the first attempt.

And finally, for problem H, which is somewhat standard, our solution had a bug - it did not handle several equal vectors in the input correctly. We've discovered this bug after the contest ended, and the solution got accepted after fixing it. Again, this problem left somewhat strange feeling since at least one team managed to squeeze through an (at least theoretically) incorrect solution - just sorting along several thousand random directions. Maybe I'm just feeling grumpy because of our result :)

Still, I'd like to thank the organizers for the wonderful Ural Championship and for making it not "yet another contest" but an awesome event :) And congratulations to the Unpretired!
Posted by Petr Mitrichev at 9:57 AM 2 comments: 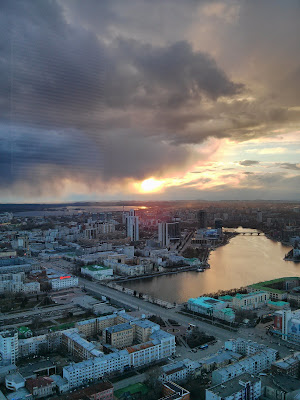 Today is the main day of the Ural Championship - the competition! About 80 teams from all over the world, and just one cup. The contest should start in about 20 minutes, and you can already follow it live in English at http://russiasport.ru/user/226/node/503740 and in Russian at http://russiasport.ru/user/226/node/534137 - right now they're presenting the participating teams.

The scoreboard will be at http://acm.timus.ru/monitor.aspx?id=152, and some spectator discussion probably at http://codeforces.ru/blog/entry/7519. My team is called "Petr team"!

Offtopic: when walking through Ekaterinburg yesterday, I've noticed that the city's central area somewhat resembles Zurich's Bellevue area: a lake which starts a river, with a large bridge over the junction that is a tourist attraction by itself (pictured on the left).
Posted by Petr Mitrichev at 8:09 AM 2 comments: 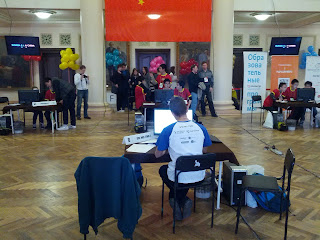 Russia vs China match - 5 best Russian teams versus 5 best Chinese teams - starts in just 7 minutes. The teams are seated facing each other in a large hall, with spectators all around. We will blog about the contest.