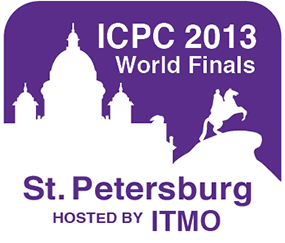 ACM ICPC World Finals 2013 start in about 30 minutes. You can follow our attempt to solve the same problems for fun at https://docs.google.com/document/d/1vIloU_JyLm5ClTn5qGa5lC2bizLG5AtIY6E9L_xSkvY/pub. Feel free to post any questions you might have here.

EDIT. The contest is over, I won't be updating the document anymore. Here are the problem statements: https://docs.google.com/file/d/0B2d37tm1YmE3dnNtOFBNOU85QzQ/edit?usp=sharing. And here's the log: 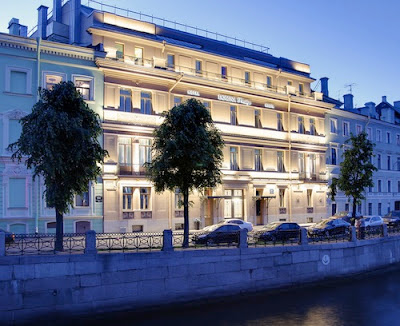 Tomorrow is probably the most famous and important programming contest of the year, at least for university students - ACM ICPC World Finals. This year the competition is in St Petersburg, more precisely in an ice hockey rink :)


There will be live video coverage with commentary at icpclive.com and live commentary in Egor’s blog at http://codeforces.com/blog/Egor. Egor is covering the practice session right now - go read his blog! Moreover, there’s a new awesome scoreboard from the organizers at http://myicpc.icpcnews.com/, which shows the results on the map and reveals which problems the team is working on right now (in the “Scorebar” view)! 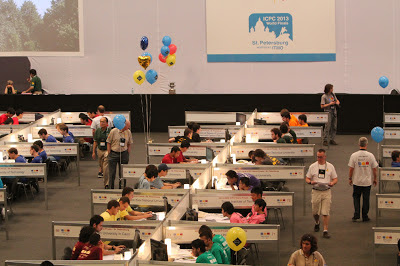 This year it will be possible to solve the problems together with contestants at https://icpc.kattis.com. Tomorrow, I will team up with meret and bmerry and try to solve the contest in real time, while still sharing our thoughts about the problems on this blog. Do you think this will work well? Do you have any suggestions on how we can make it more interesting to read?

Posted by Petr Mitrichev at 10:51 AM No comments: