There was just one contest this week - Codeforces Round 210 (problems, results). It was the last competition before the TopCoder Open, so several TCO participants took this chance to practice, including Egor, who won the round - congratulations! - and Tomek, for whom it was just the fifth codeforces round and who came eighth and achieved red rating - congratulations, too! 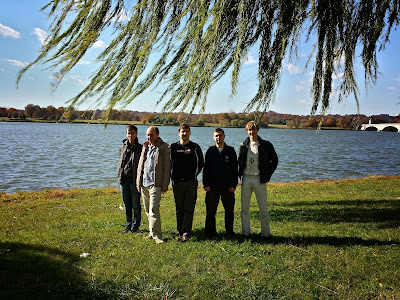 Meanwhile, most competitors have already arrived in Washington, DC for the TCO. We spent today's free day on sightseeing: the picture on the left shows tourist, andrewzta, Petr, darnley (algorithm contestants) and Milanin (marathon contestant) on the bank of the Potomac river; nothing reveals that we're right in the center of the capital of the United States. I will post more TCO pictures and updates during the week - stay tuned!
Posted by Petr Mitrichev at 4:45 AM