Yandex.Algorithm 2017 Final Round took place both in Moscow and online on Tuesday (problems, results, top 5 on the left). My contest started like a nightmare: I was unable to solve any of the given problems during the first hour, modulo a quick incorrect heuristic submission on problem F. As more and more people submitted problems D (turned out to be a straightforward dynamic programming) and E (turned out to be about finding n-th Catalan number), I grew increasingly frustrated, but still couldn't solve them. After my wits finally came back to me after an hour, all problems suddenly seemed easy, and I did my best to catch up with the leaders, submitting 5 problems. Unfortunately, one of them turned out to have a very small bug, and I was denied that improbable victory :)

Congratulations to tourist, W4yneb0t and rng.58 on winning the prizes!

TopCoder Open 2017 Round 2C was the first event of the weekend (problems, results, top 5 on the left, parallel round results, my screencast). The final 40 contestants for the Round 3 were chosen, and kraskevich advanced with the most confidence of all, as he was the only contestant to solve all problems. Congratulations!

And finally, AtCoder Grand Contest 018 took place on Sunday (problems, results, top 5 on the left, analysis, my screencast with commentary). tourist has adapted his strategy to the occasion, submitting the first four problems before starting work on the last two, but in the end that wasn't even necessary as he also solved the hardest problem and won with a 15 minute margin. Well done!

As you can see in the screencast, I was also trying out this late submission strategy this time, and when I solved the first four and saw that Gennady has already submitted them, I was quite surprised. There was more than an hour left, so surely I'd be able to solve one more problem? And off I went, trying to crack the hardest problem because it gave more points and seemed much more interesting to solve than the previous one.

I have made quite a bit of progress, correctly simplifying the problem to the moment where the main idea mentioned in the analysis can be applied, but unfortunately could not come up with that idea. That left me increasingly anxious as the time ran out: should I still submit the four problems I have (which turned out to be all correct in upsolving), earning something like 40th place instead of 10th or so that I would've got had I submitted them right after solving? Or should I avoid submitting anything, thus not appearing in the scoreboard at all and not losing rating, but showing some possibly unsportsmanlike behavior?

I have to tell you, this is not a good choice to have. Now I admire people who can pull this strategy off without using the escape hatch even more :) To remind, the benefits of this strategy, as I see them (from comments in a previous post), are:
1) Not giving information to other competitors on the difficulty of the problems.
2) Not allowing other competitors to make easy risk/reward tradeoffs, as if they know the true scoreboard, they might submit their solutions with less testing when appropriate.

I ended up using the escape hatch, which left me feeling a bit guilty, but probably more uncertain than guilty. Do you think this is against the spirit of competition, as PavelKunyavskiy suggests? Please share your opinion in comments, and also let's have a vote:


Is it OK to bail out of a contest after a poor performance with late submit strategy at AtCoder?


Here's the hardest problem that led to all this confusion: You are given two rooted trees on the same set of 105 vertices. You need to assign integer weights to all vertices in such a way that for each subtree of each of the trees the sum of weights is either 1 or -1, or report that it's impossible. Can you do that? 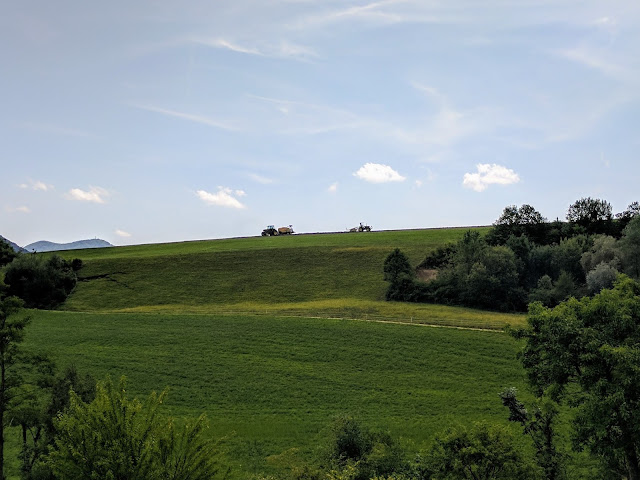 In my previous summary, I have mentioned a hard VK Cup problem. You are given an undirected graph with 105 vertices and edges. You need to assign non-negative integer numbers not exceeding 106 to the vertices of the graph. The weight of each edge is then defined as the product of the numbers at its ends, while the weight of each vertex is equal to the square of its number. You need to find an assignment such that the total weight of all edges is greater than or equal to the total weight of all vertices, and at least one number is nonzero.

The first idea is: as soon as the graph has any cycle, we can assign number 1 to all vertices in the cycle, and 0 to all other vertices, and we'll get what we want. So now we can assume the graph is a forest, and even a tree.

Now, consider a leaf in that forest, and assume we know the number x assigned to the only vertex this leaf is connected to. If we now assign number y to this leaf, then the difference between the edge weight and the vertex weight will increase by x*y-y*y. We need to pick y to maximize this difference, which is finding the maximum of a quadratic function, which is achieved when y=x/2, and the difference increases by x2/4.

Now suppose we have a vertex that is connected to several leaves, and to one other non-leaf vertex for which we know the assigned number x. After we determine the number y for this vertex, all adjacent leaves must be assigned y/2, so we can again compute the difference as the function of y and find its maximum. It will be a quadratic function again, and the solution will look like x*const again.

Having rooted the tree in some way, this approach allows us to actually determine the optimal number for all vertices going from leaves to the root as multiples of the root number, and we can check if the overall delta is non-negative or not.

There's an additional complication caused by the fact that the resulting weights must be not very big integers. We can do the above computation in rational numbers to make all numbers integer, but they might become quite big. However, if we look at the weight differences that some small trees get, we can notice that almost all trees can get a non-negative difference, and come up with a case study that finds a subtree in a given tree which still has a non-negative difference but can be solved with small numbers. I will leave this last part as an exercise for the readers.

Wow, it feels good to have caught up with the times :) Thanks for reading, and check back next week!
Posted by Petr Mitrichev at 10:04 PM