The Jul 23 - Jul 29 week warmed up with Codeforces Round 499 on Thursday (problems, results, top 5 on the left, my screencast, analysis). Without taking the challenges into account the top of the scoreboard would be quite packed, but the challenges are of course taken into account, skyrocketing Kostroma and cki86201 to clear first two places. Well done!

The main event of the week took place on Saturday, with TopCoder Open 2018 Round 4 selecting 14 finalists that would go to Texas (problems, results, top 14 on the left, parallel round results, my screencast, analysis). Both harder problems were approachable, but nobody was able to get all three, resulting in a fairly diverse scoreboard. Kankuro was still considerably faster than everybody else,
and has also cemented his lead with a successful challenge. Congratulations to Vladislav and to everybody who qualified for the onsite round!

I found the medium problem in this round quite educational, if a bit standard. You are given a program for a drawing robot consisting of at most 250000 commands. Each command is either F  "move forward by 1 unit, drawing a line", L "turn left by 90 degrees", or R "turn right by 90 degrees". The drawn polyline splits the plane into multiple regions, some finite, some infinite. Your goal is to return the list of the areas of all finite regions.

Thanks for reading, and check back soon for the solution!
Posted by Petr Mitrichev at 4:11 PM No comments:

The Jul 16 - Jul 22 week provided the second and last chance to progress to the round of 100 in the TopCoder Open 2018, with 50 more advancers chosen in Round 3B (problems, results, top 5 on the left, parallel round results, analysis). qwerty787788 was the only one to solve all three problems correctly, and thus won the first place with quite a margin — congratulations to Borys and to everybody who advanced!

Facebook Hacker Cup 2018 Round 1 took place over the weekend of that week (problems, results, top 5 on the left, analysis). Being fast was not a requirement this time, as the penalty time did not factor into advancement, but of course a competition is always a competition :) Congratulations to Kevin (are you ksun48?..) on the win! 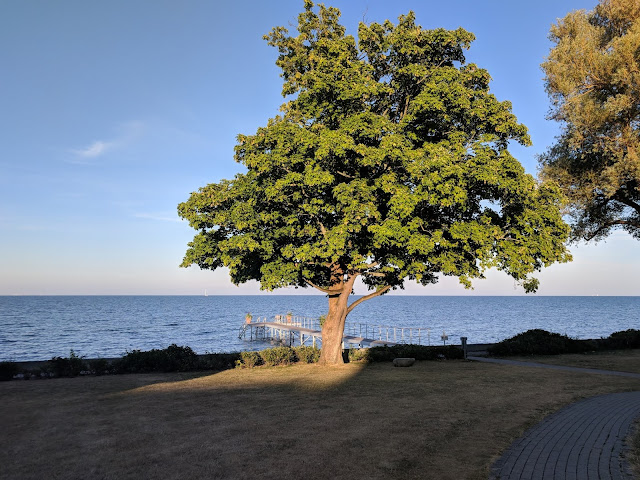 In my previous summary, I have mentioned a very nice AtCoder problem: two players play a game on an array of integers ai with at most 300000 elements. The players make alternating turns, and on each turn a player takes a number from the array that is not previously taken. Moreover, when possible, a player must take a number adjacent to a number taken by the other player on the last turn. When taking such adjacent number is not possible (on first turn, or after a player has taken a number which has both neighbors either taken or nonexistent), any number can be taken. The game ends when all numbers have been taken, and each player tries to maximize the sum of the numbers they take. Which sum will each player get if both play optimally?

Note how we didn't have to explore all possibilities here — for example we didn't consider the case where the first player starts with a red number and the second player moves to the right. We don't need to: by finding an upper bound and a lower bound for the second player's score that match, we have proven that other options will not change the answer. This observation will also be key to solving the harder case, where the overall amount of numbers is odd. 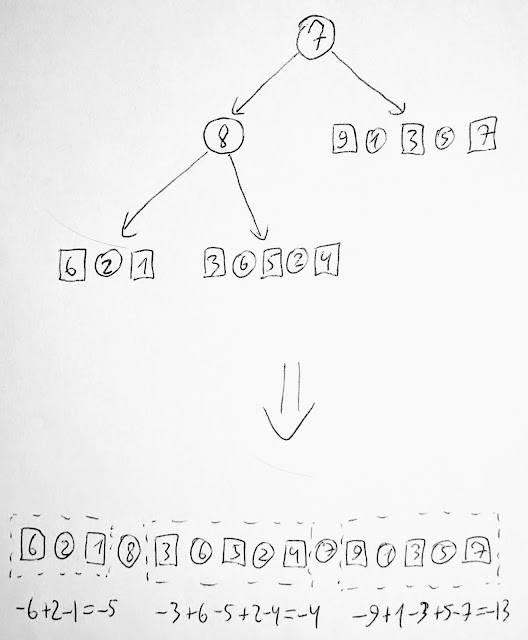 Note that we did not find an arbitrary strategy for both players — we have shown that the optimal strategy for them must look like this. The only remaining question is: how should the first player split all numbers into segments?

This is another cool side of the problem: after solving the "more mathematical" strategy part, the remaining "algorithmic" part is also interesting to solve! We have an array of numbers of odd length, with first, third, ... numbers colored red and the rest colored blue. We need to choose a set of blue numbers in such a way that minimizes the maximum of (sum of blue numbers minus sum of red numbers) over the segments between the chosen blue numbers.

There's a straightforward quadratic dynamic programming solution which finds the optimal way to split each prefix of our array, and iterates over all possible positions of the last taken blue number in each prefix.

In order to speed it up, we have to slow it down first. Let's add an outside binary search for the answer. Now instead of minimizing the maximum, we just need to check if there's a split such that on each segment the difference is below the threshold. This can still be done using a similar dynamic programming, for the overall runtime of O(n2*logn).

But now we can notice that in this simplified dynamic programming if position X of the last taken blue number is better than position Y for some prefix, it will be better for all bigger prefixes as well, since what happened before X/Y does not matter anymore (it just needs to be under the threshold), and the only thing that matters is the difference between blue and red numbers after X/Y. Whichever is smaller once will keep being smaller, since we add the same new numbers to both. So instead of trying all possible positions for the last taken blue number, we can try just two possibilities: the best position for the previous prefix, or just the previous blue number (which was not considered for the previous prefix because it was not there). This makes the solution run in overall O(n*logn) time.

Here is my entire solution from the contest:


Thanks for reading, and check back for more!

Posted by Petr Mitrichev at 10:03 PM No comments: